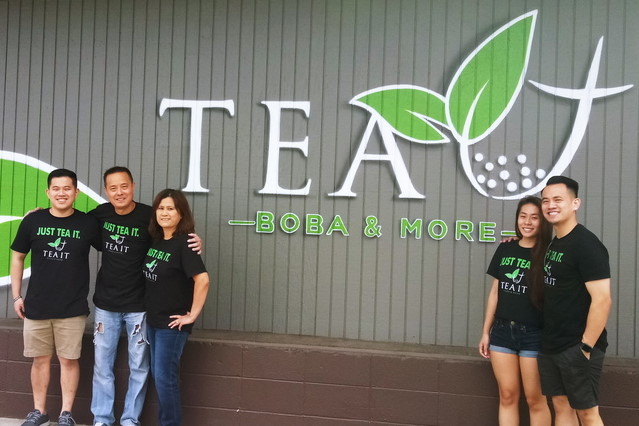 By Thomas J. Sullivan–
Tea lovers will soon have an extra spot to get their fix of bubble teas and more in Citrus Heights.

Brothers Jeffrey and Jason Liang, along with their parents, are preparing to open their new tea shop across from the newly opened Big Lots store on Auburn Boulevard. “Tea It” will feature milk tea and coffee, smoothies, fruit teas, slushies and a selection of Gunther’s Ice Cream.

The Liang family, who own and operate Aquarium Depot in Citrus Heights, signed a three-year lease for the new tea shop in early May. The location at 8516 Auburn Blvd. is a 1,500-square-foot shop, formerly occupied by a sandwich restaurant.

“The site was quite an ugly duckling, but our family felt it had a lot of promise, given what we know of the city’s plans for the redevelopment of Auburn Boulevard,” Jason Liang said.

New gray exterior paint, featuring a large painted green leaf logo entices customers with the words “Tea It – Boba and More” as they pass by.

Inside, new gray wood plank flooring was installed throughout, wrapping up the face of  a new front counter which features a bright, colorful three-dimensional mural. Thick hewn Cedar wood counter tops wrap around the interior.

The Liang family is planning a soft opening for family and friends later this month before having a formal ribbon cutting by the Citrus Heights Chamber of Commerce. Hours are expected to be seven days a week, from 8 a.m. to 10 p.m.

Parents Jack and Amy Liang had been in the restaurant business for over 30 years, and as a family, had been looking for a different way to return.

They turned the ownership and day to day management of Aquarium and Reptile Depot at 8201 Auburn Boulevard to their two sons, Jason, 30, a graduate of UC Santa Cruz, and Jeffrey, 25, who continue to make the business thrive. Mom Amy is busy working on finalizing the menu with her two sons.

The whole family has been involved in developing the menu of Tea It, and their choices of interior colors and furnishings appear designed to create a calming oasis on a very busy street.

On another wall, the twisting trunk of a blossoming cherry tree wraps pretty, pink flowers up the wall and onto the ceiling. An aquarium fish tank in its central dining area adjacent to the serving counter was a must.

“We visualized Tea It as a quiet place where people can choose to meet and even study if they prefer,” Jeffrey Liang said. “We’re also planning to build an outside courtyard area for additional seating capacity.”

The pair say they can visualize what Auburn Boulevard will look like in just a few years from now.

Their new tea shop is across the street on busy Auburn Boulevard from the future site of Studio Movie Grill, and yards south from a planned city gateway arch at the Citrus Heights-Roseville city line planned for inclusion in its Auburn Boulevard Phase 2 redevelopment in 2021-22.

The brothers said their family also worked closely with the city in the selection of a general design theme for Tea It and exterior color choices and signage which might help their new business stand out on Auburn Boulevard. “We really appreciate their help and advice.”

“In time, we’re hoping that Tea It will become a popular destination and hash tag,” Jason Liang said.